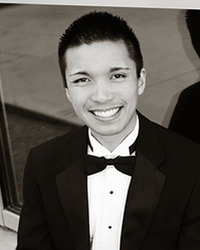 American Pianist Brandon Lee has been thrilling audiences with his technical command and tonal sensitivity in performances for well over two decades. He has been awarded first place in more than 40 piano competitions nationwide, including the Second New York Piano Competition under the auspices of the Stecher and Horowitz Foundation, the National Federation of Music Clubs, the Music Teachers National Association, the Grand Junction Young Artist Concerto Competition, and the Four Corners Piano Competition.

Mr. Lee has had training in private lessons and masterclass settings with some of the world’s foremost pianists including Leon Fleisher, Stephen Hough, Kevin Kenner, Olga Kern, Norman Krieger, Jerome Lowenthal, Robert MacDonald, Charles Rosen, Andre-Michel Schub, Abbey Simon, and Ralph Votapek. In chamber music settings, he has had the privilege of working with the Kalichstein- Laredo-Robinson Trio, Pacifica Quartet, and Fry Street Quartet. In addition, he has worked very closely with Craig Jessop in rehearsal and performances, including Bach’s St. Matthew’s Passion, and recitals in Washington D. C. and Arizona.

Mr. Lee is a graduate of Utah State University, where his principal teacher was Gary Amano. Other teachers include Dennis Hirst, Marian Kerr, and Linda Nakagawa. He completed a Masters of Music degree with a Piano Performance and Pedagogy emphasis, as well as a Bachelors of Music degree with emphasis in Piano Performance, graduating Magna Cum Laude. Throughout the course of the last 12 years, Mr. Lee has been an educator in multiple capacities, including guest clinician, lecturer, collegiate music theory and aural training instructor, group piano/keyboard harmony instructor, as well as private piano instructor, where his students have garnered awards at competitions, with some culminating in performances with orchestra.

In the Fall of 2013, upon moving to St. George, Mr. Lee accepted a position at Dixie State University as an adjunct member of the School of Fine Arts Music Faculty. Most recently, he joined the faculties of both Vista Charter School and Tuacahn High School, teaching Group Piano. He maintains a thriving private studio with almost 40 young piano students, and is looking forward to assisting in the growth of the piano program, as well as making artistic contributions to the extended community of Southern Utah. He and his wife McKenzie are looking forward to the birth of their first child in March, 2017.