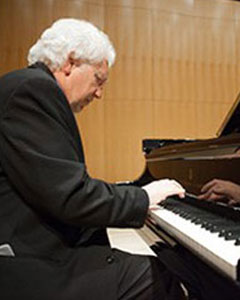 Christopher Giles has been playing the piano since the age of two and performing before audiences since the age of six. A gifted artist and teacher, he has taught for over 35 years privately and at colleges and universities. As a Southern Californian, he began formal piano lessons with his grandfather, Professor Thomas E. Giles, who was the first music dean at the University of Utah. After the death of Professor Giles, Christopher entered the University of Southern California (USC) Preparatory School of Music under scholarship and was the youngest pianist (nine years old) to give a USC-sponsored recital at Founders Hall.

After four years at USC, Mr. Giles joined the studio of Dr. Robert Turner of Santa Monica, California. During the next nine years, Christopher Giles performed numerous recitals and with several Southern California orchestras including a debut performance with the Los Angeles Philharmonic at the Hollywood Bowl. He also performed at the Beethoven Bicentennial Celebration at the Los Angeles Music Center’s Dorothy Chandler Pavilion. During those formative years, Mr. Giles entered the prestigious Santa Barbara Music Academy of the West where he received the concerto prize, performing under the baton of Maurice Abravanel. Mr. Giles was also the youngest entrant to be given this opportunity.

As a contest winner, Mr. Giles received the Gold Medal at the Gina Bachauer International Piano Competition and numerous other First Place and finalist awards across the United States. Christopher Giles’s love of chamber music began at the age of sixteen when he first collaborated with a piano trio in preparation for the Coleman Chamber Music National Competition. His trio not only received the finalist prize but also the Tushinsky Memorial Scholarship. He has been involved with chamber music ever since and enjoys it today as well as collaborative recitals with instrumental and vocal soloists.

Christopher Giles received his collegiate training at Brigham Young University, Indiana University (Bloomington) and University of Texas at Austin under merit scholarships. His teachers were Reid Nibley, Gyorgy Sebok and William Race respectively. As a lover of piano concertos, Mr. Giles has played over thirty performances with orchestra, including the Los Angeles Philharmonic, Long Beach Symphony and the Utah Symphony. In addition to numerous performances across the United States, Mr. Giles has been a recitalist for international audiences in Europe, Canada and South America. Currently, Christopher serves on the piano faculty at Dixie State University. He has three wonderful children and eight grandchildren.