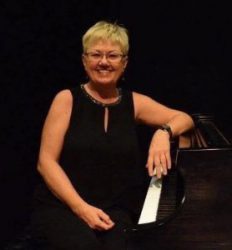 Pianist, Regina Roper built her career in the Silicon Valley of Northern California before semi-retiring to Southwest Utah. Prior to moving to Ivins in 2015, she had spent the previous 36 years teaching, evaluating, accompanying, performing, and presenting pedagogy workshops in the San Francisco Bay Area.

She holds a Bachelor’s degree in Piano Performance and Music Theory, with graduate studies under the tutelage of harpsichord virtuoso, the late Fernando Valenti. As a graduate assistant accompanist at San Jose State University in the 1970’s, she was engaged to play for the University Choir, the SJSU Choraliers (world-class a cappella singers), SJ Opera rehearsals, various studio vocal and instrumental lessons on campus, as well as the city of San Jose’s Children’s Musical Theater productions.

A current and long-standing member of the Music Teacher’s Association of California, Ms. Roper has held offices at branch, regional and state levels in various capacities. She is also co-author of an 11-level series of theory workbooks for students preparing for the California “Certificate of Merit” examinations as well as Texas students preparing for their State MTNA theory tests.

Over the past 40 years, her students have consistently earned high marks in their examinations and frequently are chosen to perform on county and state-wide Honors recitals. Several have gone on to earn music degrees and establish their own careers while others have simply developed a skill which continues to bring them joy and self-fulfillment.