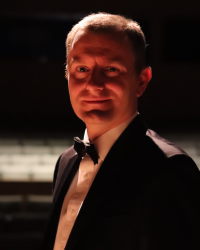 Dr. Bryant Smith is an Assistant Professor, and Director of Bands, at Utah Tech University where he teaches Symphony Band, Conducting, and Introduction to Music. Dr. Smith earned his Doctor of Arts degree from the University of Northern Colorado, and holds bachelors and masters degrees from the University of Utah and Brigham Young University. Dr. Smith studied conducting with five members of the American Bandmasters Association – David Blackinton, Barry Kopetz, Richard Mayne, Donald Peterson, and Kenneth Singleton – as well as Mark Ely, Scott Hagan, and Kory Katseanus.

Prior to his appointment at UT, Dr. Smith was the Director of Bands at Columbia Basin College in Pasco, WA, where he led the Jazz Band and the Concert Band. He has also held adjunct positions at Brigham Young university and Utah Valley State College. Before his collegiate career he was the band director at Spanish Fork High School in Utah—where he received the 2009 “Teacher of the Year” award. He is a member of College Band Directors National Association and the National Association of Music Education, and is an active clinician, adjudicator, and guest conductor.

In addition to his conducting and directing interests, Dr. Smith researches music education and music history topics, with particular focus on American and Mormon band history in the 19th century. Apart from music he enjoys spending time with his wife, Heather, and their four children here in St. George.