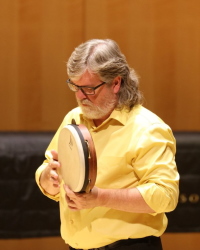 Dr. Glenn Webb directs the Percussion Ensemble and Jazz Band at Utah Tech University. He was the Founding Chair of the Music Department.  He is an endorsed artist for SABIAN cymbals. Professor Webb received his Doctor of Musical Arts in Percussion Performance from UNLV. He received his Master of Music in Percussion Performance from the University of Utah and a Bachelor of Arts in Music Education degree from Weber State University. Webb is the leading new music percussionist in the Intermountain region. He is the percussionist and Co-Artistic Director of Grand Circle New Music. He also co-founded and is Artistic Director for the St George Jazz Festival.  He is the house drummer/percussionist for the Tuacahn Center for the Arts performing for 2,000 patrons six shows a week. During the 2018 season he performs for the productions of Cinderella, Matilda the Musical, and Prince of Egypt.

This fall he will perform Mamma Mia. Regional premieres he has played at Tuacahn include Tarzan, The Little Mermaid, Aladdin, Mary Poppins and Disney’s When You Wish.  He has also been solo percussionist with the Utah Arts Festival Chamber Ensemble, Canyonlands New Music Ensemble, Utah Symphony and Opera and, formerly Principal Percussion with the Utah Chamber Ensemble and Ballet West. Webb serves on the Board of Directors for the The DiFiore Center for the Arts. During the 2002 Winter Olympic Games Glenn was a featured performer in the 2002 Cultural Olympiad with the Jose Limon Dance Company and Repertory Dance Theater. In April of 2009 Webb performed the American premiere of Lee Actor’s Concerto for Timpani and Band with the Utah Tech University Symphony Band.