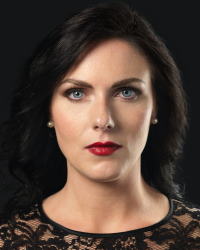 Hailed by Gramophone for her “shining” voice “with extra depth to the sound,” soprano Emily Workman recently sang the role of The Governess in Benjamin Britten’s The Turn of the Screw at the Beethoven Easter Festival in Warsaw, Poland. A recording of the premiere was released under the DUX label and nominated as, “Best Opera Album of 2016,” by the International Classical Music Awards. Other recent performances include Brahms’s Ein Deutsches Requiem with St. George’s Choral Society in New York City, and she has been a guest soloist with the Brigham Young University Men’s Chorus as well as the Florida State College of Jacksonville choirs.

Ms. Workman is a graduate of Yale School of Music’s prestigious opera program, where she received her Master of Music. While there, she performed as Antonia in Offenbach’s Les contes d’Hoffmann, Zemfira in Rachmaninov’s Aleko, the title role in Suor Angelica under the direction of John Dodson with the New Haven Symphony, Countess Almaviva in Mozart’s Le Nozze di Figaro, Mimì in La Bohème under the direction of Michael Gieleta and Giuseppe Grazioli, Strauss’ Vier letzte Lieder, Haydn’s Scena di Berenice, and Mahler’s Symphony No. 2 with the Yale Philharmonia under the direction of Shinik Hahm. While pursuing her undergraduate degree at Brigham Young University, she sang Fiordiligi in Così fan Tutte, and the Mother in Amahl and the Night Visitors.